The innovative Telos par Puca beads are created by the Parisian designer, Annick Puca, and these unique handmade beads offer many creative design opportunities. You can combine them with the other beads in Les Perles par Puca range and choose from some of the most popular colours.   We also have four great free projects from Annick Puca to inspire you.

The Telos par Puca have an innovative design with 4 holes.  These 2-directional holes give you great versatility enabling  you to create beautiful structural jewellery and to embellish your designs.  The space between the “arms” of the Telos bead allows small beads to nestle within the space. This therefore gives even more design options with this unique bead. 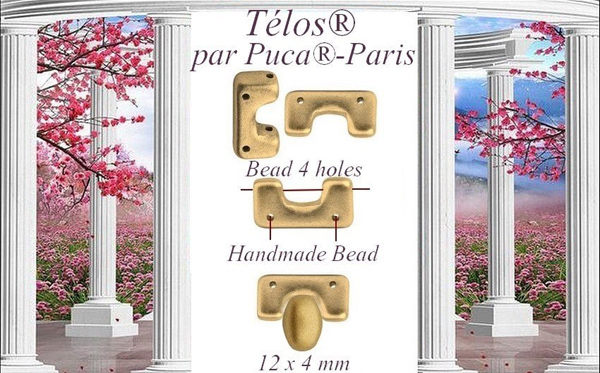 The Telos par Puca are designed to work with the other beads in Les Perles par Puca range.  You can download some great free downloadable projects from Annick Puca.  You can also view the Telos beads par Puca beads here

This striking necklace shows the popular Samos par Puca beads nestled within the Telos par Puca beads.  You can also embellish these beads with small seed beads and bugles.

The striking Taylor bracelet combines the Arcos, Minos and Telos beads.  You can use the 2-directional holes of the Telos beads to create a more complex structural design.  Here bicones and round beads are strung through the holes in the “arms” of theTinos beads which thefore gives an extra dimension.

This pretty pendant is made up of four little components.  The symmetrical layout shows the samos beads cradled within the Tinos par Puca beads. You can use small seed beads to create a contrasting embellishment.

If you love beaded beads, you can try these striking examples which use the 2-directional holes of the telos beads to create an intricate and unusual design.